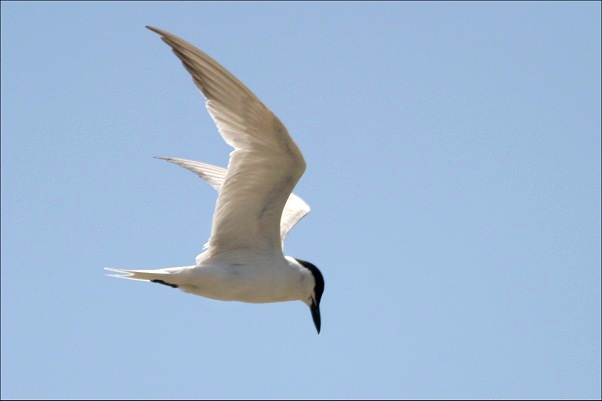 Another medium sized (35-43 cm (14-17 inches) total length) white tern with a black cap. Bill is all black and shorter and thicker and its body more robust than other similar appearing terns. Legs black. Non-breeding birds lack cap but have black extending from eye toward back of head. Birds feed with characteristic swooping pattern over marsh habitat that is unique among terns in this region.

First breed at 5 years of age. Life span may be as much as 16 years. Black cap absent on non-breeding birds, top of head white. Post breeding adults and juveniles both have dark eye patch.

Rear of crown and nape have brownish cast. Back tan with brown spots on wings.

Some authors consider this species to represent a monotypic genus-- Gelochelidon. Cosmopolitan tern divided into as many as six subspecies recognized by variations in plumage and size. Two New World subspecies, the eastern North American one (S. n. aranea) breeds from Long Island (NY) south along coast to Gulf Coast, also Bahamas and northern Antilles. Pacific coast subspecies is larger.

Found in both the New and Old World. In West Indies region breeds only in Bahamas and northern Antilles, absent from Bermuda. This is not a species that is normally found in pelagic habitats. Unlike other terns, Gull-billed Terns feed over marshes and open sand flats. A large percentage (ca. 50%) of the total western Atlantic breeding population nests on Texas’ Gulf Coast. Winters in south Florida, rarely north to North Carolina, and along Gulf and Central American Coast. Wintering status in West Indies unclear.

Not an abundant species in North America or the West Indies. It is designated as a species of conservation need at various levels of concern by a number of US states. Considered as Critically Endangered in the West Indies region (Schreiber and Lee 2000). Extirpated from Beata, Puerto Rico, several places in The Bahamas, and probably Anegada. Nests are susceptible to predation by rats at most sites, but they are rarely monitored. Buden (1990) reported predation by rats at a set of nests that he monitored on Rum Cay.

A survey of the entire Bahamas would give needed information as to the actual size of that population. Currently it is estimated that the Bahamas has as much as 60% of the total population for the region. Removal of exotic plants and animals from documented nesting cays would improve hatching success and help reestablish open sand flats and secondary dune habitats. Gull-billed terns would be a good species for which to count adults foraging during baseline and future assessments at sites where eradications are conducted. Appropriate signage at all know nesting sites will help to avert unintentional disturbance of nesting birds. Human disturbance around nests is the major source of nest failure. Disturbance of young causes early dispersal from nests and subsequent loss from exposure to weather and predators. The control of Laughing Gulls at some sites may be appropriate. Birds once disturbed will shift colony sites, making it difficult to locate the “new” colonies, provide site protection from year to year, and to monitor populations. Birds can move to new sites in the same nesting season or subsequent ones. In most cases these sites are less favorable. Protecting existing sites from disturbance and development is the best conservation option. Like the Black Noddy, this species is in desperate need of regional protection and possibly management in the area, but because of the scattered nature of their nesting and the fact that many sites probably support only a few pairs, most sites will not be in a position to receive adequate protection. Perhaps efforts should focus on educating and training people who frequent areas around nesting sites (fishermen, recreational boaters, nature tour leaders) to act as voluntary wardens to oversee nesting sites and to monitor breeding activity.

Our knowledge of this species could increase if an index of breeding pairs to the number of flying birds in an area could be developed. Such an index would require a study with counts of the flying birds combined with intense searching for nest sites through often rough terrain.

At present, most estimates are merely reports that the birds frequent an area and nests are almost never found and counted. For example, the population is currently unknown on Great Inagua -- the second largest island in the Bahamas -- but there could be hundreds of pairs given the huge area and many lakes.